My first inkling that there even was a person named Ian Siegal in the world came in 2007. I was trying to see who was playing at a blues festival called Blues on the Farm in Chichester, and when I googled it his name came up as someone who was playing there.

My reason for trying to find out the line-up for this festival, was due to  hearing a rumour that a girl we liked a lot called Imelda Clabby (now Imelda May), had stopped singing with Mike Sanchez and Blue Harlem in order to form her very own band, which would be making one of its first public appearances at the festival.

It was a long way to travel from Darlington to Chichester, which was as far South as you could drive without ending up in the sea, but we Gurus reckoned Imelda was worth it. We also knew that the wonderful Mike Sanchez was going to be playing there too, plus the Festival Of Speed was on at Goodwood at the same time, and we had several different groups of friends living in that area as well, so hey lots of good reasons for making this trip – so why not?

All I could find out from the BOTF website was that Ian Siegal was definitely booked. I didn’t know anything about him, but looked at the picture of him which was on the site, and thought ‘bet that was taken a while back, he’s bound to be one of those very good, but very tedious middle-aged blues guys who indulge in long drawn out guitar solo’s, and think that they’re Eric Clapton, (yawn)!!!’

How wrong could one woman be?

We got to Chichester and stayed at The Vestry a five star B&B/pub which was very nice, as we got to drink into the early hours and eat bar snacks every night we were there…

We saw The Miller family who’d been my friends since the 1950s.

We also knew some people there that Mike Sanchez had connected us with via his MSN group, which he ran under the name of Zorro!

A great time was had at Blues on the Farm on Friday night, seeing and hearing Mike Sanchez and his band, and also getting to know some new friends (Jilly, Ange, Steve and Uwe).

In spite of torrential rain, we enjoyed The Festival of Speed during the day on Saturday and attended a lovely party at Charles and Liz Miller’s house on the night.

Then on Sunday, when Imelda was due to play we returned to Pump Bottom, Farm where the blues music festival was taking place…

The weather was awful as it was still pouring with rain, and very muddy underfoot. In fact, we were ankle deep in the stuff even inside the marquee where the music was being played. When a musician called Lisa Mills took to the stage she was almost electrocuted, due to water leaking in and coming into contact with her equipment…

Anyway, the excellent organisers managed to stop the leak and the weather brightened up a bit, and this Ian Siegal band came on.

The band consisted of three people. Ian Siegal himself was slim, tattooed, bare-armed, and dressed in a battered straw cowboy hat, faded denim waistcoat and jeans, and snakeskin cowboy boots. I remember feeling relieved that he had no paunch and didn’t look at all like I’d expected him to look. The others were a tall rangy bass player (who also looked interesting), and an older dark-haired man on drums.

Then they started to play, and that was it for me. Ping!!!

I just stood there riveted as the realisation of how good they were hit me. It was one of those eureka moments when you know that you’re witnessing something incredible, and you’re going to want to go on repeating the experience forever if possible.

Our friend Steve Wilkins, realising how impressed we were with Ian, insisted after he’d done his set that he come over and sit down with us. Then Steve introduced Guru’s Col to Ian and asked for permission to take a photo. Ian stood up and Col stood next to him, in order that this could happen. Other people who were around, then just started snapping away, as if this man was some sort of exhibit.

I felt slightly uncomfortable with that, so before I joined in too, I asked Ian if it was OK. When he nodded to say it was, I took a picture of them both for Col to keep.

Ian mentioned he would soon be making a journey North to play at The Cluny, so I made a mental note not to miss that. As soon as we got back home I began to look out for any other Ian Siegal gigs too, as after just this one encounter we were all well and truly hooked.

I went there primarily to see the wonderful Imelda’s new band, and to catch up with Mike Sanchez again too (and wasn’t disappointed of course), but came away with a premonition that Ian Siegal (and the way he played music in just the way we liked it), was going to be a recurring factor in all our futures…

When we got back home I looked on Ian’s website and saw that even before the two consecutive gigs at The Cluny, he and his band were coming to Guisborough. Feeling very excited at the prospect I quickly booked tickets for that.

The night of the Guisborough gig arrived, and we (Michael, Col and I), found ourselves sitting in eager expectation in a room that looked like it had never altered since the 1970s, which I thought was quite sweet.

The band were even more amazing than they had been at BOTF. In the interval when we were buying ‘Swagger’ (his latest CD), I asked Ian if we had missed the Tom Waits night I’d heard he was doing at The Black Gardenia, and he said unfortunately we had. We didn’t ask him to, but to our delight he performed some Waits in the second half of the gig, and said it was for someone he’d spoken to in the interval, and I had that premonition thing again about Ian being of some significance to us, and knew we’d be seeing him again and again.

I also remember thinking he looked worryingly wasted and hoped he wasn’t going to make himself ill with whatever excesses he indulged in, and depart this world before I did.

I just realised that sounds a bit selfish, as if once I’d gone, he could do what damage he liked… 🙂

Next time we saw the band was at the now legendary two-parter at The Cluny in Newcastle and both these gigs were even better than the ones we had seen the band do before. On that Saturday night Ian strutted and preened, and the band did justice to the music exactly the way it should be done. He also drank excessively onstage. I drink far too much myself, but I’d never seen anything like this. The next part of this set of two gigs at the same venue was on Sunday lunchtime. This time when Ian arrived on-stage he mentioned he needed to sit down for the first couple of songs, as he was still recovering from a rough night. That didn’t prevent people from plying him with double and triple JD’s, and even giving him bottles of the stuff, one of which he all but totally consumed during the course of the gig. Even one of our biker friends who had come along with us to see what all the fuss was about said “Christ, he must be a coke-head, as that’s the only way he could stay sober enough to perform a gig after all that” then he added “are his audience trying to kill him?” I had to agree with our mate and felt quite upset in case this Ian bloke I’d just found overdid it all, as that would be a tragic waste.

I absolutely LOVED the gigs (the one on Saturday night, and the one on the Sunday lunchtime), both of which were entirely different, with no songs repeated…and we all wanted to follow the band down to Nottingham, where they were going to play again on Sunday evening.

Of course, we didn’t because we had to get back and prepare for work in the morning! As the band were leaving for Nottingham, I asked Ian how on earth he could manage to do yet another gig that day, after the weekend he had already had. His answer was “it’ll be more like a comedy routine I expect, but at least I can sleep in the back of the car on the way down”, and with that he was gone…

Anyway, that was an account of my/our first four encounters with Ian Siegal, and since then we have attended many phenomenal Ian Siegal shows, and could tell interesting stories (some of them life-changing), related to those memorable gigs!

There have also been times when we had great seats booked for other bands, then found out they clashed with an Ian gig, and so either just gave the other tickets away or wasted them in favour of seeing him, and his excellent band which was made up at that time, of bass player Andy Graham, and Drummer Nikolaj Bjerre.

I’ve felt ever more entertained and enlightened with each time we’ve seen Ian Siegal, whether with one of the bands he plays in (of which there are several), or solo etc.

We have followed Ian all over the place since that first incredible gig, and in an inspired moment back in 2008 when I was coming up to sixty-five years of age, I booked Ian and his band, Imelda May and her fabulous band, and our talented friends Norman Beaker and John Price, to do a joint birthday gig for myself and Colin.

I wanted to stage this occasion more than anything else in the world, and OK it cost me all the money I could scrape up, but it was worth every penny.

That party remains unequalled for us Gurus, and many of our friends say the same.

Quite simply, it was our ultimate dream gig! 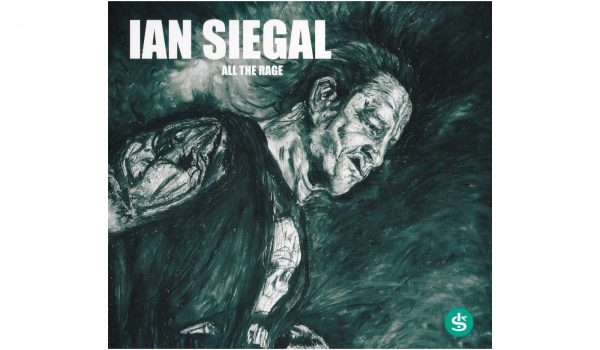 This is the cover of  Ian’s recent CD (All The Rage). He painted the cover image himself from a fantastic photograph captured by an extraordinarily talented lady photographer named Cristina Arrigoni.